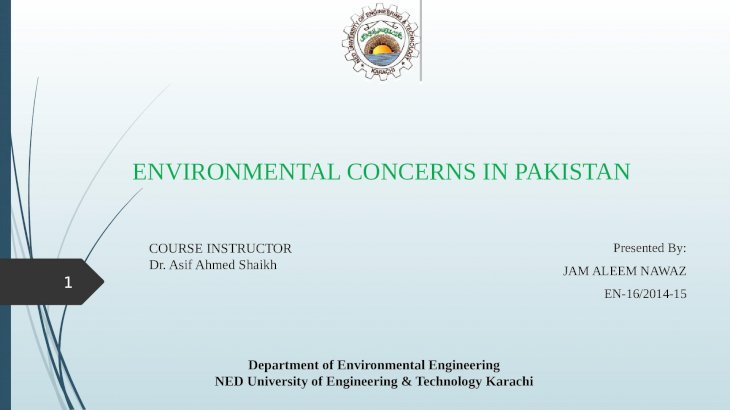 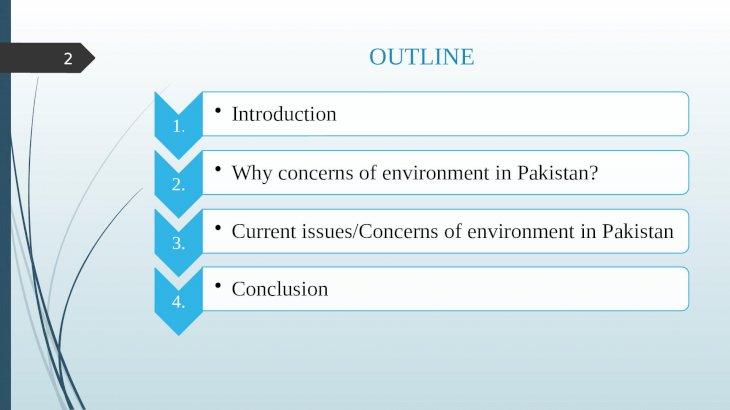 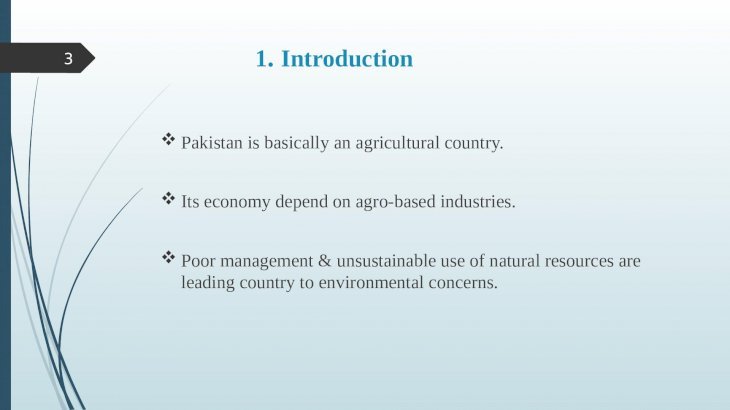 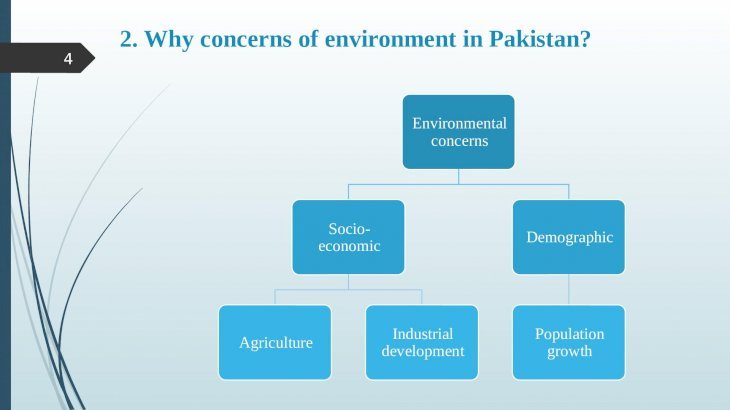 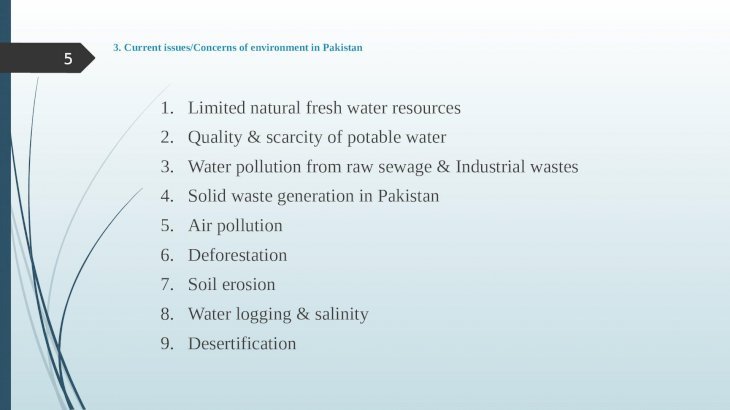 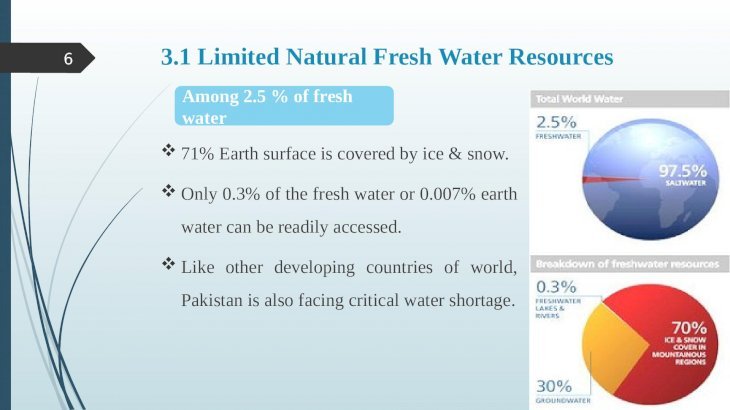 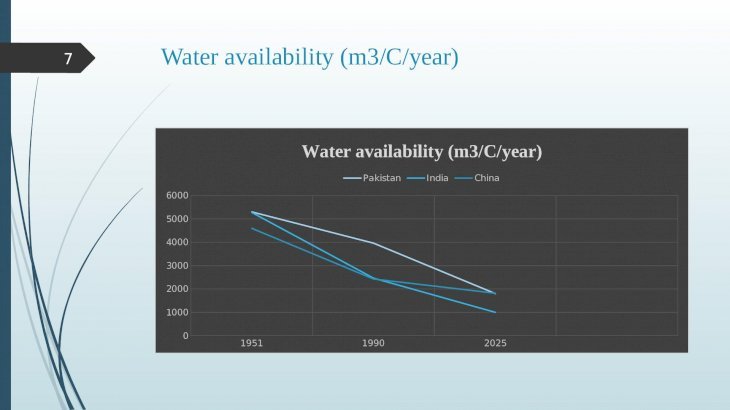 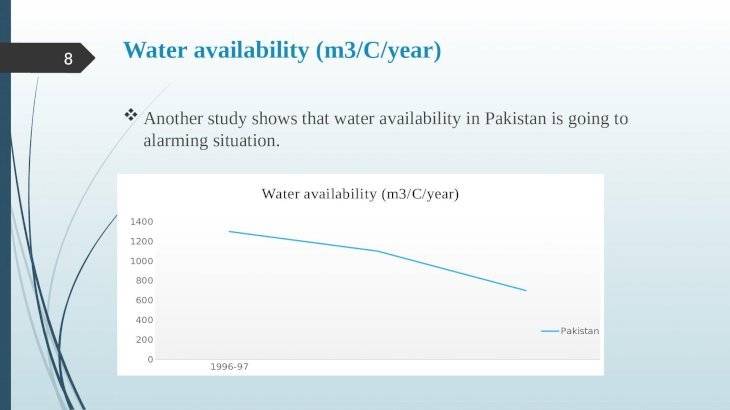 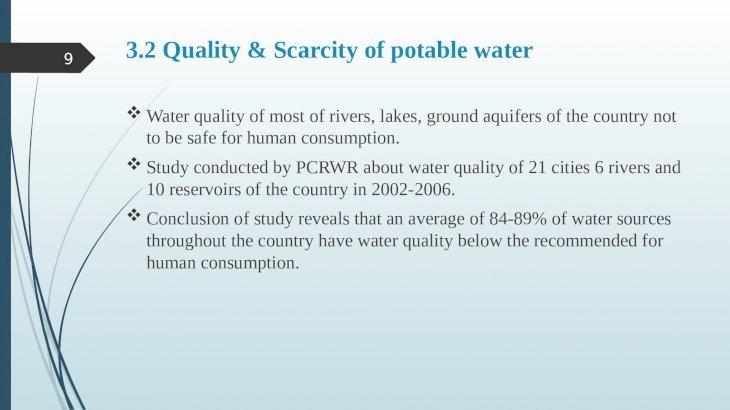 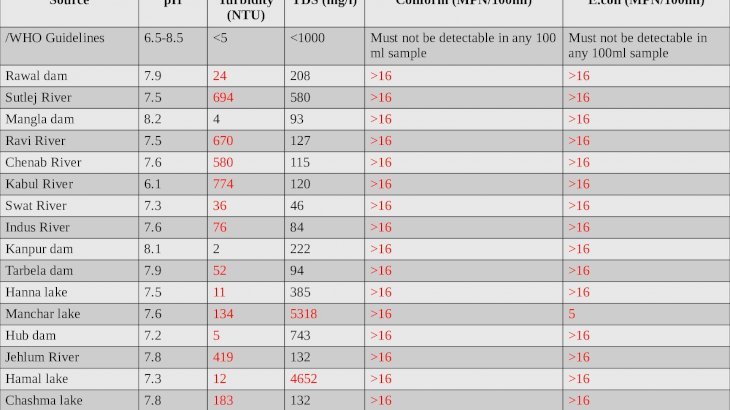 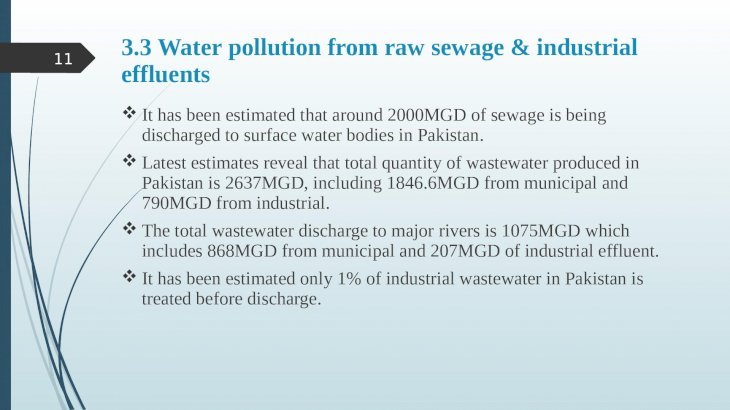 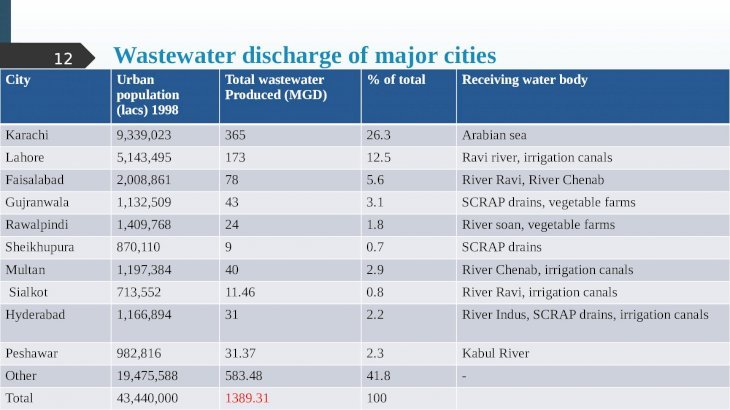 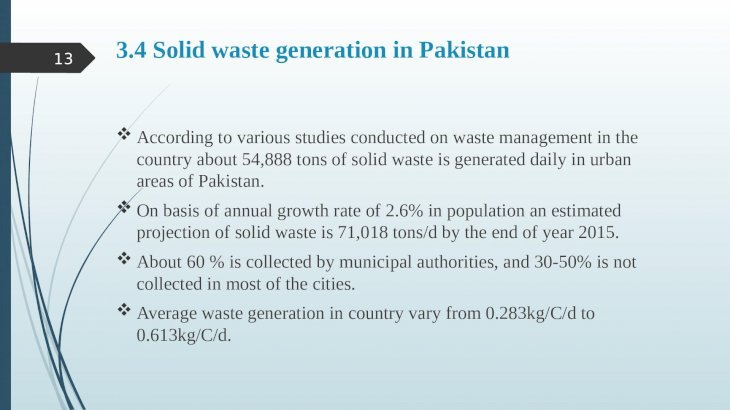 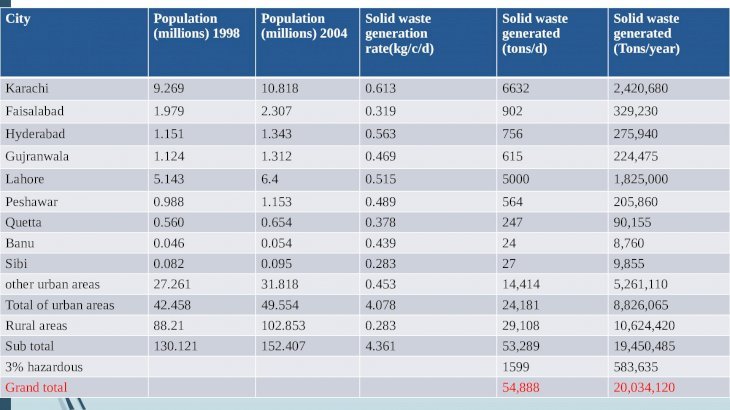 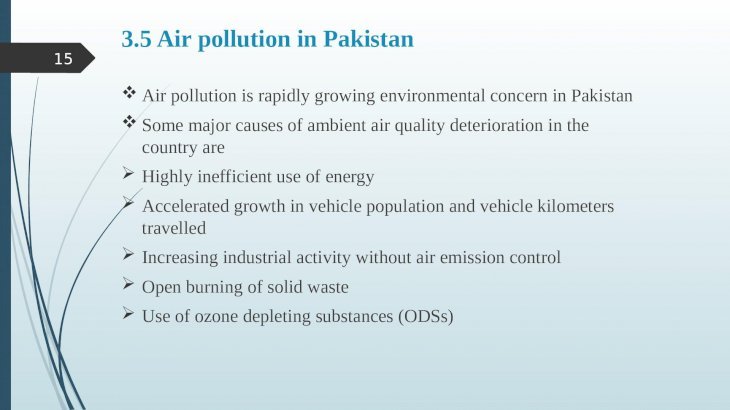 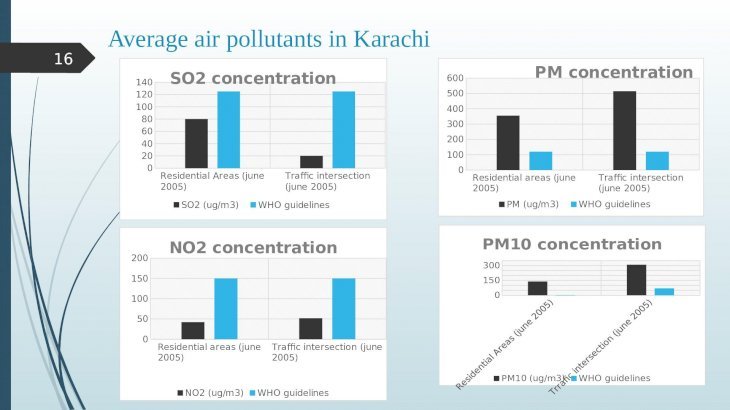 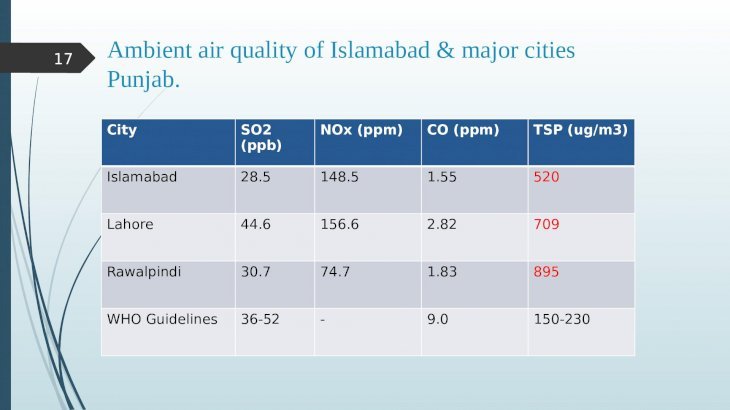 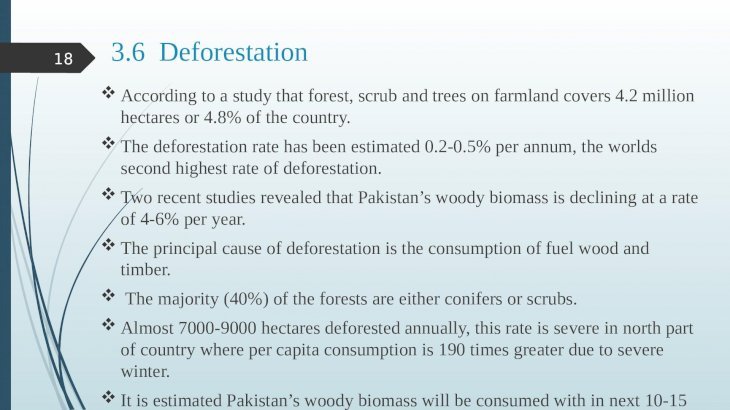 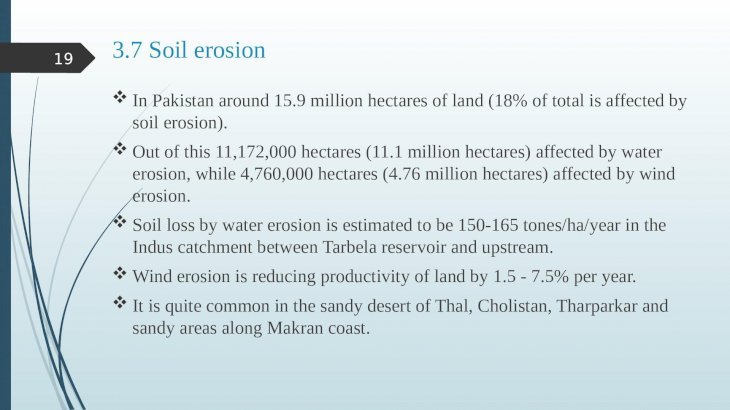 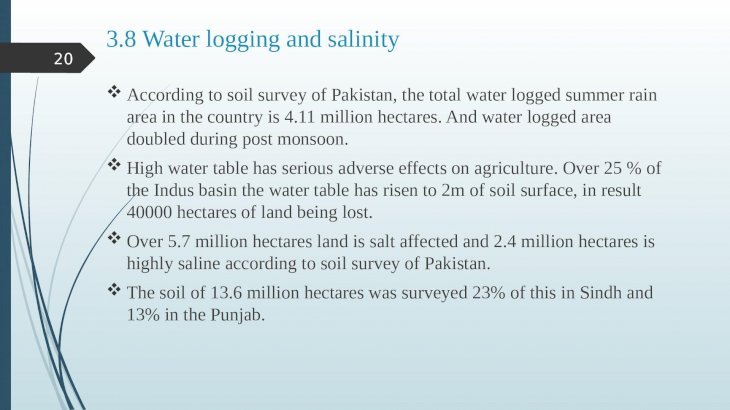 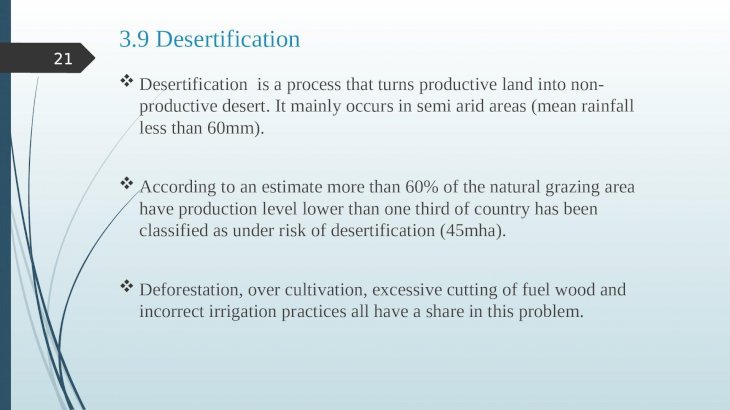 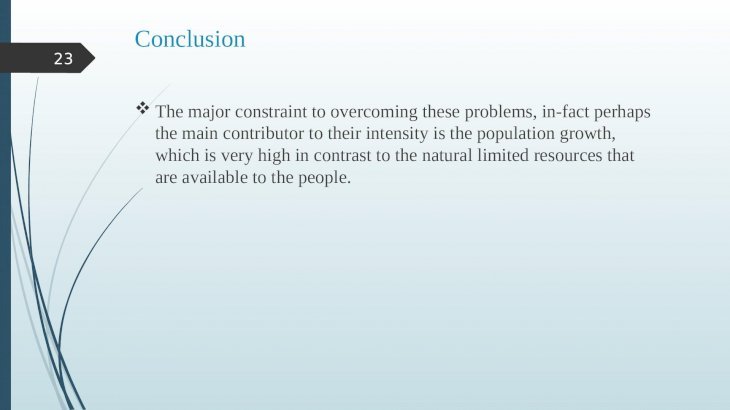 1. IntroductionPakistan is basically an agricultural country.

Its economy depend on agro-based industries.

Poor management & unsustainable use of natural resources are leading country to environmental concerns.3

2. Why concerns of environment in Pakistan?

3. Current issues/Concerns of environment in Pakistan

71% Earth surface is covered by ice & snow.Only 0.3% of the fresh water or 0.007% earth water can be readily accessed.Like other developing countries of world, Pakistan is also facing critical water shortage.

3.4 Solid waste generation in PakistanAccording to various studies conducted on waste management in the country about 54,888 tons of solid waste is generated daily in urban areas of Pakistan.On basis of annual growth rate of 2.6% in population an estimated projection of solid waste is 71,018 tons/d by the end of year 2015.About 60 % is collected by municipal authorities, and 30-50% is not collected in most of the cities.Average waste generation in country vary from 0.283kg/C/d to 0.613kg/C/d.13

3.6 DeforestationAccording to a study that forest, scrub and trees on farmland covers 4.2 million hectares or 4.8% of the country.The deforestation rate has been estimated 0.2-0.5% per annum, the worlds second highest rate of deforestation.Two recent studies revealed that Pakistans woody biomass is declining at a rate of 4-6% per year.The principal cause of deforestation is the consumption of fuel wood and timber. The majority (40%) of the forests are either conifers or scrubs. Almost 7000-9000 hectares deforested annually, this rate is severe in north part of country where per capita consumption is 190 times greater due to severe winter.It is estimated Pakistans woody biomass will be consumed with in next 10-15 years 18

3.9 DesertificationDesertification is a process that turns productive land into non-productive desert. It mainly occurs in semi arid areas (mean rainfall less than 60mm).

According to an estimate more than 60% of the natural grazing area have production level lower than one third of country has been classified as under risk of desertification (45mha).

Deforestation, over cultivation, excessive cutting of fuel wood and incorrect irrigation practices all have a share in this problem.21

ConclusionA number of serious environmental problems are inherent in the country, which are of great ecological concern in terms of its sustainable economic future. Only 1% of the industrial wastewater is treated before discharge There are serious sewage & effluent problems and lack of sanitation affecting the natural resources and posing health risks.Quality of drinking water is not fit for human consumption.Water scarcity is also going to alarming condition.The use of raw materials is also inefficient and many reusable resources are discarded as waste.

ConclusionThe major constraint to overcoming these problems, in-fact perhaps the main contributor to their intensity is the population growth, which is very high in contrast to the natural limited resources that are available to the people.